The Babylonian Sirrush - Here be dragons... 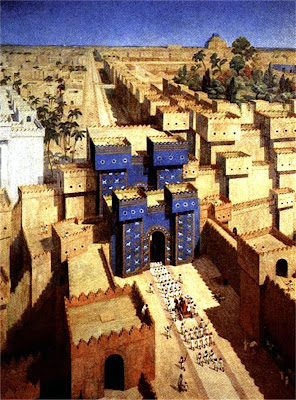 Babylon (yes, the same Babylon mentioned in the Old Testament so many times) lies in ruins about 55 miles south of the modern city of Baghdad, Iraq.  If one were to visit the ancient city of Babylon, capital of the Babylonian Empire, during its days of greatness, there would have been many things to see. Babylon was the premiere city in its time for its military, its architecture and its learning.﻿ 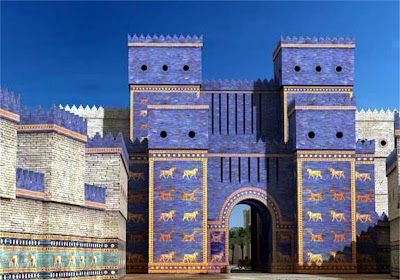 One of the first things that a visitor in ancient times might have been shown was the gigantic and beautiful Ishtar, or Blue, Gate. This was the gateway leading to the large processional way, a giant thoroughfare leading to the many temples that filled a large portion of the city.

The Blue Gate was blue because it had been covered with tiles glazed with a blue ceramic. Remarkably, their polish was so hard that you can still see the beauty of the actual gate today.  Reconstructions were easy to make, since the details of the gate are still clearly visible.

On the gate were many illustrations, created by molding the surfaces of the bricks themselves.  They were meant to depict symbols of power, to intimidate outsiders and subjects alike.  Note in the pictures the exquisite detail of each of the images and the skill that made the images so life-like and of extremely realistic proportions. 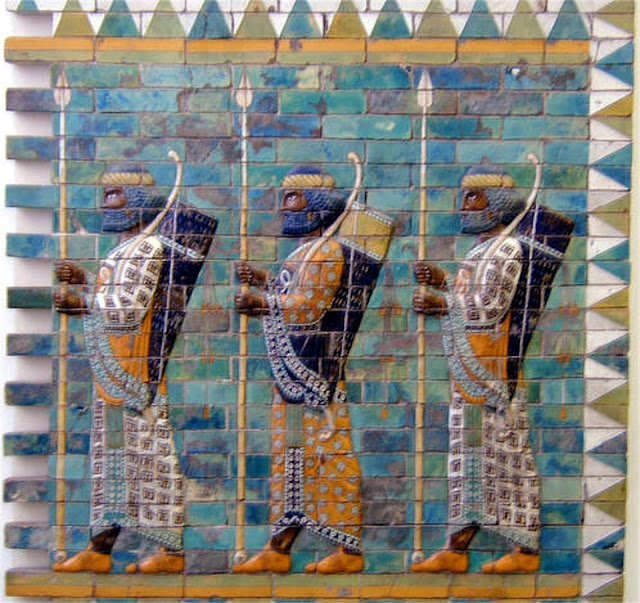 There were soldiers, imposing with their arms and beautiful robes.﻿ 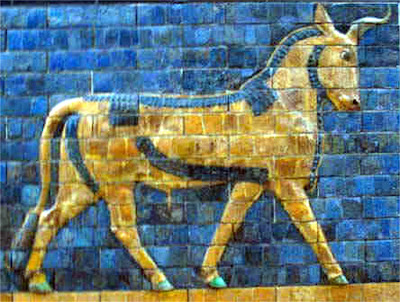 There were images of bulls, a symbol of strength, virility and brute force in almost every culture, not just the Babylonians. 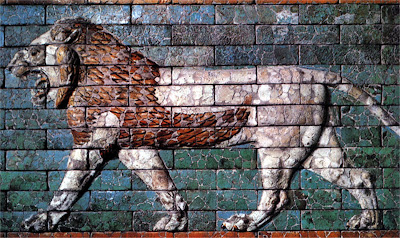 ﻿﻿﻿﻿Lions were, of course, well represented, since they were the symbol of Babylon and the ultimate image of regal strength and intimidation.

Note the great detail and realism lavished on each image.

What is this doing here, then?  It is something the Babylonians called a "sirrush."  An equal amount of detail and realism has gone into its depiction.

"A mythological creature," you say?  None of the other images are mythological.  The Babylonians wanted to intimidate people.  People are more intimidated by real things than by fairy tales. 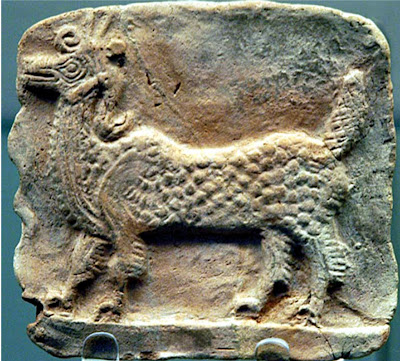 The image of the sirrush was very common in the Babylonian culture and was carved and drawn repeatedly.  It is routinely depicted as a frightening and terrible beast.

Notice in this drawing that the sirrush was approximately the size of a man.

Also notice in this close up of the same drawing, that the forepaw or "hand" of the sirrush has a distinctively long thumb and claw. 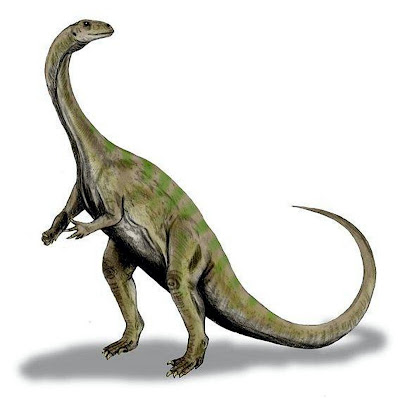 Now, meet Massospondylus, a creature whose remains have been found in great quantities, indicating that it was a very common species.   This drawing was constructed from the fossilized bones that have been found. 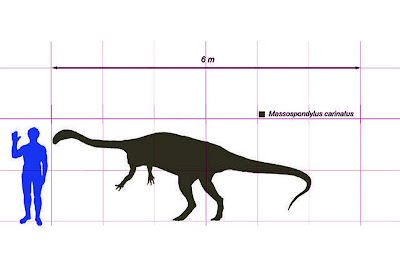 Massospondylus was about the size of human being or a little larger, as this chart illustrates.

Massospondylus has a large claw on the "thumb" of each "hand," just like the sirrush did.  Note the representation here.


What about the horns and frills in the drawings of the sirrush?  Horns and frills are mostly soft tissue, like skin and flesh.  They rarely survive in the fossil record.

The Darwinistic evolutionists insist that dinosaurs lived millions of years before man-kind, with no possibility of contact between the two.  The evidence seems to indicate otherwise.

This blog has been written with the sole purpose of using the ample evidence available to verify and support the biblical record, while refuting the copious propaganda that is shoved down our throats daily by materialistic uniformitarians.

It is my contention that the Bible describes God's original creation of people with extraordinary capabilities who subsequently built an advanced civilization that exceeds our own. That civilization was destroyed in the Great Flood and we have spent the last 5,000 years trying to re-build that civilization. I contend that science supports all this in multiple disciplines, but this information is ignored or suppressed by various people who have an opposing agenda.


Nothing that you see on this blog is original. Any fact that you see here is obtainable on a dozen different websites and books. I use these facts and photos, without violating their copyrights, under the legal principle of fair use practice. That is, I use them one time, for educational purposes only.


The point is, nothing here is made up. The only thing that I do (or need to do) is assemble this information in a discernible pattern.

You might want to read through the first entry posted on this blog (Past Remembering: Thoughts toward a coherent view of our ancient past, our present and our future) in order to understand my theoretical and theological underpinnings more clearly.


The truth is there. You just have to see it.

So there is nothing new under the sun.

Already it has existed for ages

Which were before us.